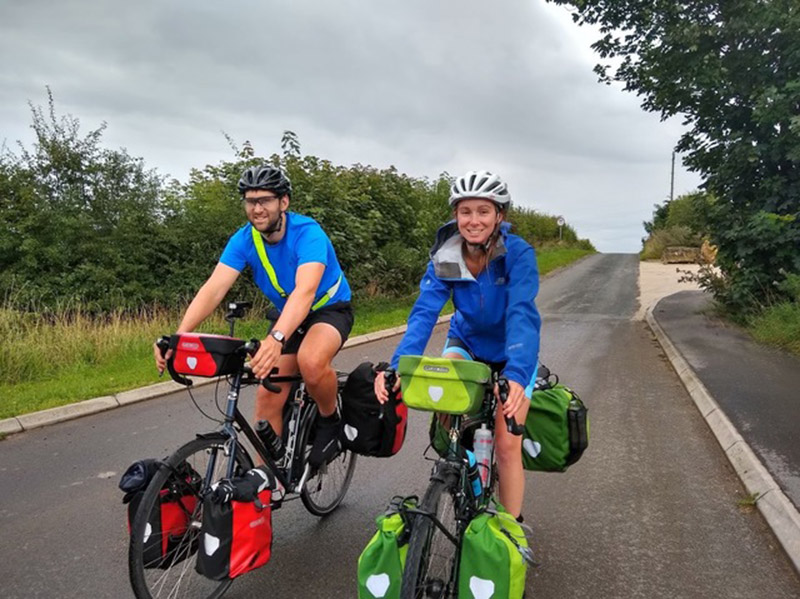 A HUSBAND and wife who paused their 10,500-mile year-long bike ride to get married in Barnsley are about to continue the rest of their journey.

Lucy Robinson (nee Alliott), who is originally from Silkstone but now lives in London, is the granddaughter of former Barnsley Chronicle editor Don Booker, who died last year.

Lucy and her husband James Robinson – who got married at Silkstone Church on Saturday – started their Cape 2 Cape adventure at Cape Wrath in the Highlands of Scotland at the beginning of August. The pair are part-way through tackling 17,000km in 365 days in an aim to reach Cape Town in South Africa.

The journey was inspired by Yorkshire adventurer Alastair Humphreys, who wrote a book about cycling around the world, including going from South Africa back to Yorkshire.

Lucy, 28 said both she and James, 29, are avid cyclists and planned the Cape 2 Cape adventure before they were even engaged.

She said: “James has wanted to cycle through Africa for a long time and he got me on board with the idea. We made it a Cape to Cape adventure as we are going through many countries and wanted to see the beautiful scenery and cycling routes across the UK.

“We got engaged between coming up with the idea and now and decided to get married along the way. We wanted that to be in Silkstone as that is where I’m from and where I grew up.”

The pair paused their journey last week to prepare for their cycling themed wedding on Saturday, which they celebrated surrounded by family and friends.

“It was a fantastic day and it was a cycling-themed wedding,” said Lucy. “There were cycling themed decorations and it was a lot of fun. On the Friday it was tipping it down with rain and we put our wellies on to put up the marquee, but luckily, on the day, it was beautiful sunshine.

“We had friends who even cycled there.”

The couple say so far they have enjoyed cycling through Cape Wrath – which is the most north-westerly point in mainland Britain.

“It was amazing, we had to get a ferry and there were just two vehicles there and it is just so rural. We saw this couple who live in this lighthouse who are cut off for many months of the year. That was just fascinating.”

Lucy said when organising the route she has mostly been looking forward to cycling through Sudan, although she doesn’t know if this will be possible due to the current political unrest.

Both Lucy and James aim to be cycling through the Sahara during winter and they say they will organise for family members and friends to come with them for part of the journey, although they don’t know when, and where that will be.

For most of the journey they will be camping and even though they are avid cyclists, Lucy said she isn’t looking forward to carrying 35 kilos of equipment around.

“We haven’t really been doing a lot of training as we cycle a lot anyway but the tricky bit will be carrying everything. We aren’t really used to that.

“It will be interesting, we’re just really looking forward to it.”

The couple have set up a blog about their journey and will be posting along the way.